The Xcite 1100 linear electrohydraulic excitation systems are the most popular in the Xcite Systems product line. They are currently being used extensively throughout the world for a broad range of applications from testing underwater structures to turbine failure studies in jet engines.

Versatility of application has been designed into the Xcite 1100 systems. The 1100 series exciter heads are capable of imparting static and dynamic forces of up to 1000 lbs. each to structures of varying rigidity while providing the highest frequency response available in the industry. Their small size makes them easy to fixture and their precise construction of top quality materials assures reliable service and long life. The exciter heads may be placed under force or displacement control through their systems’ master control unit as the test requirements dictate. And the portability of the entire system , including its hydraulic power supply, permit its use at any test site as well as in the laboratory.

To demonstrate the versatility of the Xcite 1100 Systems, this note contains brief discussions of a number of applications and problems for which the systems have provided solutions.

The 1106-4-T/C exciter head was first placed under static displacement control to apply the proper preload force to the structure, which was mounted on air aides.

The exciter head was then placed under dynamic force control to maintain the forces dictated by a Fourier analyzer, which was programmed to output random energy in the frequency range DC to 100 Hz. 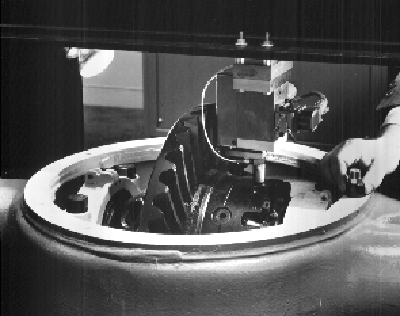 Mounted to the rear axle of a truck, the 1106-4-T/C exciter head provides the input force necessary to determine the axle’s resonant frequencies and mode shapes. The analyzer provides the exciter head with random energy from DC 1000 Hz and the subsequent data analysis.

Because the Xcite System is capable of maintaining constant forces regardless of the test structure’s dynamics, the exact forces demanded by the analyzer were provided at the driving point. The force signal from the exciter head’s load cell were used not only as feedback to the System’s master control unit but also as one channel of input to the analyzer.

The response of the structure was measured by accelerometers, located at various points on the axle housing, and fed to analyzer inputs. Using these inputs, the analyzer then calculated and displayed the transfer functions and mode shape of the axle in the test frequency range. Further, the System operator was able to use the signal from any transducer as the 1100-4’s dynamic input. For portions of this test, an acceleration signal was used as feedback to the master control unit to provide random acceleration control of the exciter head. In this manner the Xcite 1100-4 System was used to perform mechanical impedance, power spectral density, shock loading, impulse testing and input simulation functions.

Gear Box Analysis
To overcome failure problems, a gear box main shaft was tested with an Xcite 1100-4 System to determine its dynamic characteristics. Particularly suited for exciting relatively stiff structures, the 1000 lb. static preload capability of the 1106-4-T/C exciter head was used to study the effects of radial loading on the roller bearings and the load’s effect on the shaft’s resonant frequencies.

The gear mash frequency at 70 miles per hour was around 700 Hz. The Xcite System was used to generate transfer functions from 10 Hz to 1000 Hz using 500 lbs. of dynamic force. 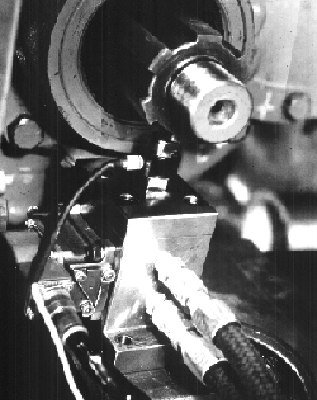 The 1000 lb. static force capability of the 1106-4-T/C is used to determine the effect of the roller bearings on the resonant frequencies of a gear box main shaft.

It was established that a resonant frequency of the main shaft was being excited by the gear mesh. Since this frequency was highly dependent on preload -i.e., bearing stiffness- the failure problems could be solved, it was determined, by using bearings that were five times stiffer to raise the resonant frequency out of the normal gear mesh excitation range.

A series of tests were conducted using the Xcite 1100-4 Systems to study the contributions of various suspension components to the noise measured in the passenger compartment of a popular sub compact automobile. The 1106-4-T/C exciter head was selected for the project because of its ease of fixturing; since it can be statically controlled by force or displacement, the 1106-4-T/C is ideally suited for studying highly compliant and non-linear structures.

In the first phase of testing, the exciter head was placed under the car’s rear axle. The amount of displacement and static force were varied to observe changes in the axle’s transfer function resulting from these parameters. The noise problem under consideration occurred near 600 Hz.

Next, with the 1106-4-T/C still under the axle, the suspension’s transmissibility was studied by running controlled tests of static displacement and dynamic force while various components of the suspension were removed. This provided an understanding of the relative contribution of each component to the transmission of gear mesh vibration from the axle.

By drilling holes in the axle tube and holding an accelerometer mounted on a rod against the axle, it was determined that the axle itself was the primary cause of the noise problem. Its resonant frequency corresponded to a vehicle speed of 66 mph. This test showed clearly that the noise spectrum inside the car could be altered substantially by shifting or eliminating the axle’s resonance.

A rear wheel was replaced by the 1106-4-T/C exciter head in the final test of the series. With its 1000 lbs. static preload capability, the 1106-4-T/C easily supported the load experienced by the wheel. With the exciter head under static displacement control, transfer functions were run using various levels of dynamic force. The ability of the Xcite System to maintain a constant force level, regardless of changes in structure stiffness as resonance are exciter, makes it ideal for this type of testing.

The results of these tests provided the design engineers with not only the resonant frequencies of the idler wheel assembly, but also its mode shapes and areas of high stress at any given frequency. Subsequent design changes eliminated the fatigue failure problem.

Lathe Chatter
Chatter problems in a lathe were investigated using the Xcite 1100-4 System. Since the exciter head had to be mounted between the tool holder and the work piece and dynamic forces of up to 500 lbs. were required from 0 to 1000 Hz, the Xcite Systems 1106-4-T/C was the only exciter head which would meet the application requirements.

After the transfer functions of the lathe have been plotted and the mode shapes determined, the designer knows which structural components must be modified to enhance cutting efficiency. The Xcite System proved to be an effective tool in reducing operating costs through structural design improvement; its use eliminated the expensive trial-and-error approach to design changes. 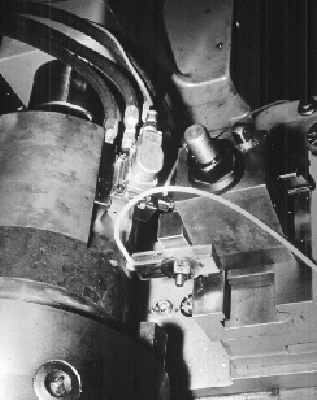 Ease of fixturing enabled the 1106-4-T/C head to be mounted between the tool holder and the work piece to study lathe chatter.

Milling Machine Chatter
The Xcite 1100-7 System was again called upon to investigate the chatter problems in a milling machine. To track down the cause of chatter, excitation and response data were gathered, a plot of the transfer function between the cutting tool and the work table was obtained, and the mode shape of the entire was measured at all important resonant frequencies. 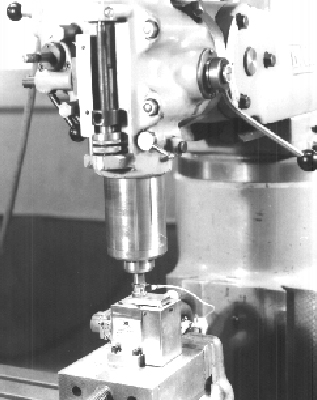 To trace the causes of chatter, the 1107-4-T/C is mounted to study a milling machine’s axial spindle dynamics.

The 1107-4-T/C exciter head was originally designed specifically for this application, in which small size, high forces and extremely high frequency response, 0 to 2000 Hz, are required. The 1114-4-T/C is easy to fixture and minimizes the changes in structural dynamics caused by the mass of the exciter head. Xcite Systems’s unique capability of maintaining constant force regardless of changes in structure stiffness as a type of test to be easily performed.

Using a conventional single loop force control system, the force from the exciter would decrease as the structure becomes weaker and the operator would be continuously attempting to adjust the loop gain to maintain the required force level. The Xcite System eliminates these problems and automatically compensates for structure stiffness changes, leaving the operator free to operate the transfer function analyzer.

Punch Press Load
To determine the transfer functions from the point of operational loading to each component, and Xcite 1000-4 System was used to simulate the loading which a punch press experiences when in operation. In this manner, the energy paths through the structure were characterized and it possible to rank each component by its vibration characteristics and, ultimately, by its contribution to the overall punch press noise level.

This method of investigation proved to be highly cost effective; the primary contribution to the overall press vibration and noise was determined to be the crankshaft. Because it had a resonant frequency located in the range of maximum energy input, the shaft amplified the amount of vibration passing through it to the bearings and to the crown.

It was discovered that by merely tightening the bearing clearances, the crankshaft no longer resonated at each breakthrough of the punching operation. Using the Xcite System, the overall noise from the press was reduced significantly at minimal cost. 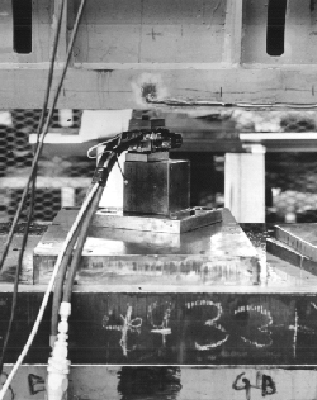 The Xcite 1100-4 System is used to simulate the operational loading of a punch press.