Giving Seismic “Vibes” To A Diesel 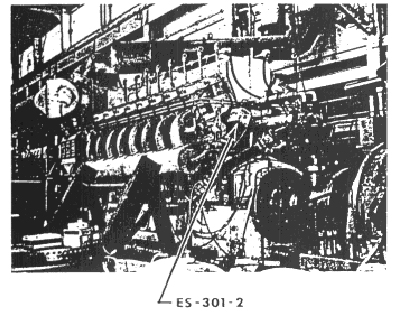 To assure a diesel engine getting the ‘vibes’ can be quite a task. That’s particularly true when you want to impart seismic vibrations to the 16-cylinder, 16-inch bore engine that has a block weighing close to a quarter million pounds. The situation becomes even more complex when the engine is mounted on a test stand that cramps the fixturing of excitation equipment.

A Cincinnati consulting engineering firm was able to meet the needs by using an inertial mass exciter that requires no backup fixturing. Their use of the exciter, along with similar recent cases, points the way to simplified artificial excitation, down to the seismic range, of a variety of structures difficult to test dynamically heretofore.

The consulting firm, Structural Dynamics Research Corp., was called upon to perform seismic qualification tests on the diesel by its West Coast builder. The engine was destined for power generation in remote mining areas. Its ability to live through earthquake stresses and continue to function was of critical importance.

Size of the diesel generator, 20’ by 6’ by 15’ high, prohibited qualification by testing at vibration levels experienced in an earthquake. The equipment had to be analyzed by computer modeling to obtain the desired end results. Components or systems having resonant frequencies higher than the seismic range could be considered rigid bodies and static computer analysis would surface.

Those components having modes of vibration within the seismic range had to by dynamically analyzed, which meant a much more complex computer modeling. Low-level testing in which the vibration amplitudes are lower than experiences in a seismic event could be used to define the correct analysis procedures before modeling attempts were performed.

The ability to use low-level testing was a fortunate advantage. In approaching their analysis, the engineers found the massive diesel engine to be one of the stiffest structures they had ever tried to excite artificially . Further it proved to be one of the most difficult to fixture. They found stiffness at the base laterally to be about 3,000,000 pounds per inch.

Nevertheless they were able to apply a linear exciter laterally and get the necessary data by inputting up to 20,000 pounds force. The analysis showed no resonance below 10 Hz.

Exciting the engine along its axis, however, was another matter. Stiffness was still a problem but, more importantly, the position of the engine on the test stand precluded the extensive fixturing required for linear excitation.

Anticipating some of these problems, the engineers had included in their test gear an inertial mass exciter built by another Cincinnati company, Xcite Systems. The force is generated by driving an internal mass by means of a hydraulic actuator and doesn’t require any backup fixturing. 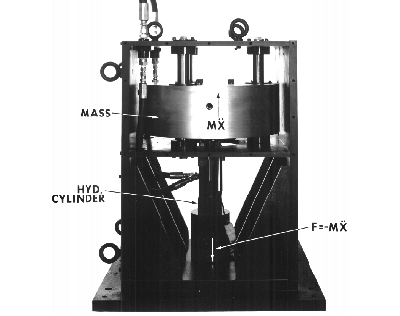 Having learned the engine had no resonance laterally below 10 Hz, the engineers chose to excite the engine axially with the Xcite 1100-5 inertial mass system with up to 1,000 pounds peak force from 20 to 600 Hz.

Due to the configuration of the engine, the only place the exciter could be mounted was near the top of the diesel’s block. This worked advantageously for the testing engineers since the stiffness was significantly less there than at the bottom of the block. Accelerometers were mounted at various points around the diesel’s block to pick up the responses.

With the mechanical impedance testing being used, the technique was to define for the diesel’s structure its responses to controlled inputs over a specified frequency range. Hence a random technique was used to excite all frequencies content applied resulted in lower force levels at any given frequency. 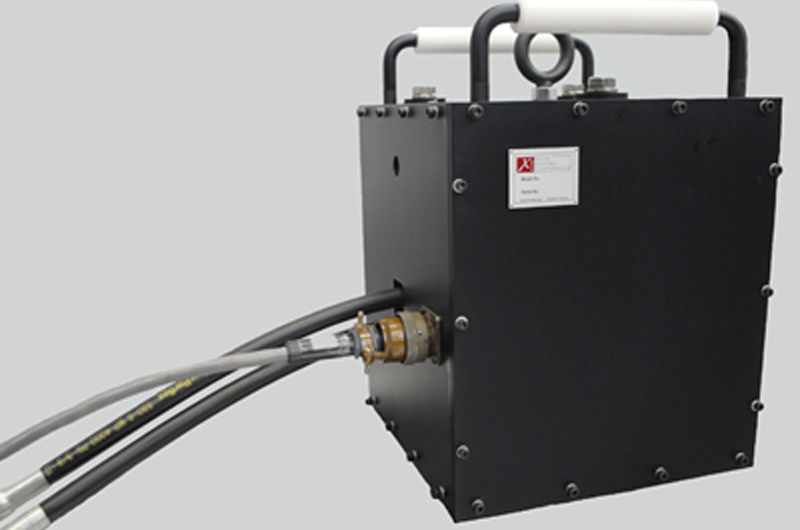 This came about since the exciter was primarily designed to sinusoidal or single-frequency testing, for which the peak force figures are valid.

The advantage, however, to the technique used was that all desired frequencies could be excited at once and the engineers did not have to stop at each frequency, excite, and take response readings. Repeated averaging of the lower amplitude random signals resulted in meaningful data.

The signals coming back from the load cell of the exciter and the accelerometer mounted on the engine were processed digitally with an on-site minicomputer. With this technique the engineers were able to determine the modes of vibration of the diesel generator within the upper seismic range. The actual data obtained, of course, are proprietary to the engine builder.

The Xcite 1100-5 system thus enabled the engineers to get test results that would have been difficult to obtain with a linear exciter due to physical limitations on space for backup structures.

The model used in the diesel seismic qualification testing weighs just 140 pounds and measures 10″ by 10″ by 12″. Its ability to create artificial excitation forces without backup structures and its easy portability have simplified artificial excitation to the point where it can become a generally used field or laboratory tool.

In recent instances it has been applied to missile silo testing, seismic testing of electrical transmission towers both at the base and at the top, and to vibration testing of piping systems. 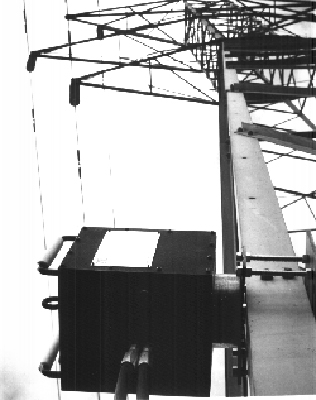 ES-301-2 used for modal excitation of a transmission tower.